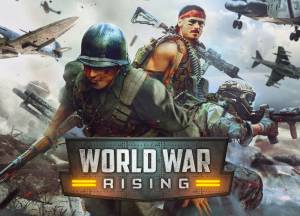 Looking for the complete World War Rising Guide? Trying to get to 50K in points? Can’t get past that final battle?

Check out this complete look into the incredible game of World War Rising.

But if you’re going to play it, you should do it right – on a big enough screen to see all of your units at once.

How to Play World War Rising on PC

Play World War Rising on Bluestacks and up your gaming skills to the next level. See below for the steps for quick-and-easy way to start playing WWR on your Windows or Mac machine today.

Seriously – it takes less than 5 minutes!

World War Rising is a mobile game application and classified as an Massively Multiplayer Online Real-Time Strategy (MMORTS). It has a strong following, with over 5,000,000 installs and counting.

Like other games in its genre, World War Rising is only as fun as the features and people you play with. Luckily, this has plenty of both.

That’s not to say it’s perfect.

World War Rising’s biggest drawbacks include the highly-detailed visuals and its push toward driving gamers to purchase in-game “packs.” We’ll get to that more in a bit and what can be done about it.

First, let’s look at the mechanics of World War Rising: your objectives, how it works and who would have the most fun playing this game

Getting Started with the World War Rising Guide

After downloading World War Rising, you’ll immediately be taken through a tutorial to give you a lay of the land.

The first few minutes of the game are dedicated to introducing you to the different building units, resources, in-game functions and units.

You’re given clear instructions along with visual cues (animated, moving arrows) to point you to the next thing. This is usually a button for building or researching something.

There’s also a place for

Your base has a number of units to provide resources, upgrades, defense and weapons to deliver the crushing blow to your enemies.

Below is a comprehensive list everything that you’ll interact with throughout a given game cycle.

This is the base hub. All other buildings and troops are tied to it.

Some research for new upgrades is conducted here. The amount of – and power – of units whether infantry or otherwise, are also connected to the level of command center you have.

It’s essential to protect your command center at all costs. Almost anything else can be rebuilt, but once this building is lost, you’ve lost the war you’ve fought so hard to win.

The command center level also has a direct relationship with your hospital’s capacity and troop health, which we’ll discuss more below.

These take care of troops and infantry with low health. You can upgrade the hospital to increase the amount of troops which can be held and healed.

These buildings have limited range since they stay inside your base, so you’ll need to invest in another type of hospital – MASH (Mobile Army Surgical Hospitals). Use these as you go on the offensive with your army, taking them from one place to another and keeping your troops in tip-top condition. The more you have, the less resources you’ll need to spend on replenishing your army.

The Training Grounds is where the majority of your activity and resources will be focused once you get the hang of the game. Here is where you create all of your army units including:

Like many portions of the game, the strength of your troops is correlated to the level of building units that you own. Specifically your Training Ground and Research Facility.

Troops tiers range from 1 (weakest – but you can create troops immediately) to 4 (strongest – but you must have a level 30 Training Ground and Research Facility).

Higher tiers also cost consecutively more resources, including food. However, it’s important to point out that your troops can’t actually starve – they just get really pissed.

For additional troop output, you may also use the mercenary portal. This building trains specific types of troops that have special abilities. They range in the resources required. Also, you only have a limited time to produce them, so it’s akin to an in-game Wheel of Fortune.

The troop types are co-dependent on each other’s abilities. Think of the rock-paper-scissors game:

Without continuous R&D, the quality and speed of your battles will be significantly diminished. The Research Center levels up every possible building and unit.

Here’s some of the biggest areas of research that you’ll focus on:

The ability to research is connected to your resources and command center level. Those must be kept top-of-mind throughout the game to keep afloat.

Anything you build or train requires resources. Similar to your research, you’ll only be able to move at the speed that your resources are acquired.

Similar to troops, these resource buildings can eventually be leveled up to produce more resources at a faster rate.

Each resource requires a specific type of building unit. The more you have, the faster you’ll acquire that resource type. You can create the following:

This is introduced early on in the game, and you’re able to develop multiple types of missiles as the game progresses. Given its ranged attack and punch, the missile silo is an unrivaled offensive weapon that should be used to its fullest extent.

Like other units, missiles have a range of attack.

Use your trading post to help your Alliance Members via resources (RSS). You must increase your Command Center to level 8 to partner in an Alliance and send out resources.

While underrated, the wall is your first line of defense against the enemy. You can upgrade it, add traps and increase your defenses for troops. Like other buildings, you must upgrade your wall in order to upgrade other buildings throughout the game.

There’s 2 main labs within the base that can be utilized:

All strategies within World War Rising should lead to your ultimate objective: Dominate other bases and win battles

While there’s hundreds strategies that can work, this World War Rising Guide is focused in on a few tried-and-tested methods that should work no matter what style of gaming you have.

Heroes help in a variety of ways, chiefly among them is leading your troops to victory. There’s a few different heroes within World War Rising:

As you can see, different heroes drive success depending on your fighting style and what level you’re currently at in the game.

Use your emblems within the Armory. Combine them and determine which ones will lend to your fighting style (attack versus defense).

Create a powerful serum from the serum lab to increase your troops attacking power (up to 4,500%).

Focus on one specific troop type: When upgrading and creating your troops, it actually works to your advantage to focus your efforts and resources on a single troop type.

But what if the enemy base use that against me by creating troops that play against my troops’ weaknesses?

This strategy only works if you’re part of an Alliance where each member is coordinating with the others and specializing in a troop type that rounds out the entire group.

Talk with your other Alliance members to determine where you can fit in with your unique set of troops. Ask them upfront if this is a strategy that they’d be up for trying, as it only works if you’re all onboard.