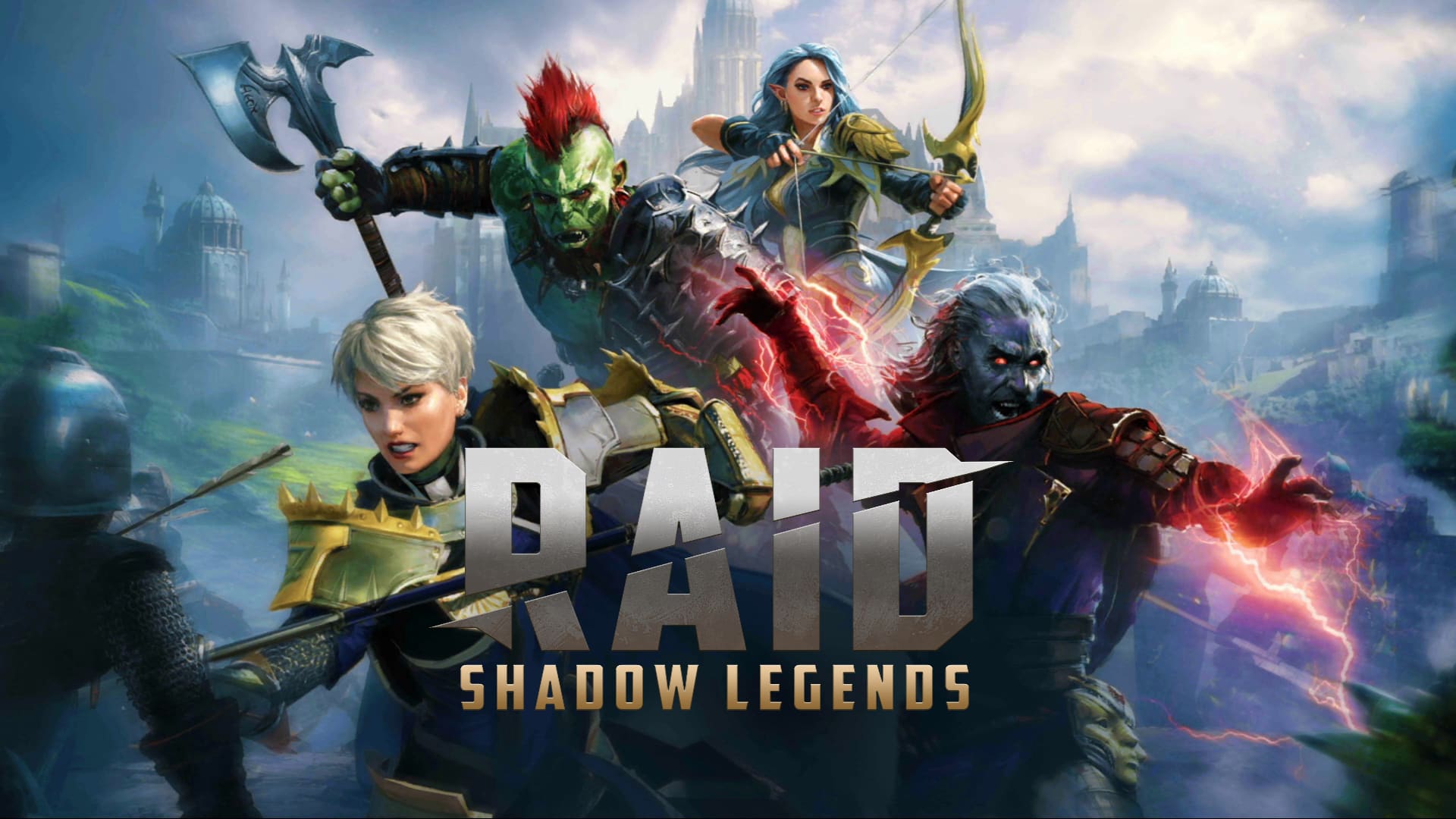 If you are looking for a way to download and play Raid Shadow Legends for PC by following quick and easy steps, you have landed on the right place!

Here, you will be guided about everything, from the game itself and how to instantly have it installed in your laptops.

Raid Shadow Legends is the ultimate, one of the most thrilling games for the dark fantasy lovers. It takes the players to a massive, detailed and picturesque world featuring realistic characters and a fantasy-filled arena and makes them the leader of battle to follow.

The world of Teleria is under a sinister spell of the dark lord Siroth. The grip of the menacing forces is becoming stronger and stronger each day. There is a need to liberate the realm from these dark forces, and only YOU can do it.

Summon the most powerful warriors, create a strong alliance among the champions, prepare them to fight along in an epic battle to follow and equip them with the right artifacts to do so. The game narrates a voiced story as you play around 12 astonishing locations.

Raid Shadow Legends is a fantasy, role-playing PvP game, developed and published by Israel game developers, Plarium games. It was initially developed as a mobile game for Android and IOS platforms, but its massive popularity among gamers led to the release of its PC port recently in January 2020.

The game has so much to offer to ensure an exhilarating experience throughout the game. Some of its most eminent features include:

The game starts with the brief tutorial, familiarizing you with the particulars. You instantly become a part of this tutorial with four champions at hand. By the end of the tutorial, you lose all of your four champions to the enemy, but you are given a choice to revive one. That’s how you start building an army.

It goes without saying that to do a successful raid, you need the most skilled and adapt champions on your side. They need you as much as you need them. There are over 300 champions to select from 16 different factions, and it can be done in a variety of way.

The important decision to make here is choosing the right champion and knowing how to combine that so they collectively become unbeatable. This is the single most defining act of your entire battle and has the greatest say in assuring your victory. Your options include champions for:

Gear Up Your Champions

Equipping your champions with the appropriate tools and gear, depending on their strong suit is crucial for your victory. You can also upgrade your gear to the maximum level of +16 to elevate your chances of victory. Obviously, it requires you to unlock different bonus scattered around the game.

Invest time to know your Bastion and how you can benefit from each of its section. The Bastion consists of a Mine, Great Hall, Market, Portal, Sparring Pit and tavern. Each place has a different set of services to offer to you and your champions.

Develop and manage your Bastion to keep earning shards and building and upgrading your fortress. Trade in the market and upgrade your fort to train the champions and preparing them for arena battles, dungeon runs and so much more.

You can also become part of a clan and raid along with your clan members in heated battles, face the vicious demons in the dungeons together and ascend the clan rankings. Later you can claim the bonuses gathered by your clan activities.

You have all the control over you champions with limitless options to arm them with fitting tools, manage their strengths and weaknesses and provide them with hundreds of different looks. Don’t be careless while devising your champions with various attributes.

You are the decision-maker, and you hold the key to victory or defeat. Plan well, make tough decisions, know your moves and train your champions with powerful gear, leading them in challenging quests. Upgrade and increase their level to unleash extraordinary skills.

The game features a thrilling story campaign indulging you profoundly in epic dark fantasy as you roam around 12 different locations. The entire experience is exhilaratingly realistic and keeps you glued to the screens.

There are only a handful of incredible features of the game. The game has the most vivid and life-like experience to offer, with graphics so spectacular; you can hardly get off the game.

So, are you ready to bring peace and harmony to the troubled realm along with your compelling champions?

Now that you are familiar with the game and are willing to play it, the question you might be wondering about is, ‘Can I play Raid Shadow Legends on PC?’

Let me show you how you can jump right into the adventurous world of Teleria from your PCs and desktops.

Here’s how to play Raid Shadow Legends on PC.

How to Play Raid Shadow Legends on PC

One of the most striking and distinguishing thing about Raid Shadow legends desktop is that it does not require you to have an emulator installed in your laptops.

Unlike all other mobile game, you do not have to go through the entire process of downloading and setting up an emulator on your PC.

Put your phones aside and stop worrying about getting an emulator, turn on your PC and begin the fun-filled adventure.

Raid: Shadow legends have a PC port. You can play it on your PC and Mac through Plarium Play.

But what is Plarium play, and how does it make your gaming experience different from playing through a mobile?

What is Plarium Play?

Plarium Play is an application launched by Plarium where you can download and play all the available games in the fastest way possible on your PCs and Mac.

All the games available on the Plarium are absolutely free to download and play. Raid Shadow Legends is one of them, that you can enjoy instantly and without investment. The cherry on the top, using the Plarium Play itself is free too.

One of the finest things about this launcher is its optimized performance based on your system. This promises better stability, high-resolution graphics, variable customization options and configurable controls and keys.

Plarium Play is a cross-platform application. This means that once you have registered your account with Plarium Play, it will sync your settings, purchases and progress of the game between PC and Mobile versions of the game. This ensures a seamless experience of playing, if you want to continue from your mobile phone.

How is it Different?

The gameplay, which is the core of the game and which has initially attracted the fans towards it is same. The only thing that’s been added is better graphics and more convenience for the players.

The environment and the game characters display an improved version of texture and graphics, with life-like appearance, smooth animations and motion blurring. The frame has been enhanced to make it visually more spectacular.

The improvement is noticeable as soon as you join the game, with better lighting and self-shading during battles. You can also control various effects; turn them on or as per your desire through fully configurable graphics setting.

To make it more apt for PC, you can also customize the control to play in an easier manner from the keyboard and mouse. Also, for repetitive actions, you can link custom hotkeys so that you do not have to perform monotonous tasks over and over again when you can do them with just a click.
Now, let’s jump to the real question.

Raid Shadow Legends PC download is uncomplicated and unlike other games.

To play Raid Shadow Legends for PC, what you really need is a Plarium Play and Plarium ID, that’s the gist of it.

Follow these quick and simple steps to start playing right away.

That’s it. This is all you need to do enjoy this startling, adventure-filled, fantasy game on your PC right now.

With Plarium Play, you can also connect with other players from around the world in addition to having glitch-free, smoother PC gaming.

Sometimes people face certain issues with the launch of the game.

But don’t worry. We have got solutions.

If you are one of the people searching for ‘’Raid Shadow Legends won’t launch PC’’ or anything similar in context. We have got you covered.

Here’s what you can do when you face a crash while launching the application.

Often a complaint is received that the game seems to crash while you are connecting to the network. This can be fixed by activating the plane mode before launching the app.

Then remove it after you have passed the pop up mentioning connectivity issue. This will most likely resolve the issue and enable you to launch the game without having to install any additional application.

Another way is to use TurboVPN to connect your iPhone to a Virtual Private Network (VPN) which usually stabilizes the game when you are playing it through Plarium.

This method is recommended by Plarium itself. However, there are instances when this might not work in your favor, and you have to resume with the first option.

Games like Raid Shadow Legends, Guns of Glory, King of Avalon, Marvel Strike Force, Rise of kingdoms and many more that offer thrilling experiences have been among the favorites of the gamers because they keep the gamers on their toes. Naturally, they are always looking for a way to play these mobile games from the convenience of their PCs.

Emulators like Bluestacks and Plarium Play by the Plarium has always come to the rescue, enabling the players to enjoy seamless, improved and visually attractive experience, with configurable controls and hotkeys for redundant tasks.

Raid Shadow Legends for PC, played via Plarium Play guarantees all of this and much more. Little glitches here and there, if encountered, can easily be fixed and players can continue to command and relish in the realm of Teleria along with their mighty champions.

So, what are you waiting for? Follow the comprehensive guide given above and brace yourself to enjoy your favorite game on your personal computer. If you thought you were missing on a few of the fun elements while playing on a mobile phone, this guide will now help you get the most out of Raid Shadow Legends.